More and more British farmers are combining their sheep, chickens and other poultry with rows of solar panels and producing a double output of food and home-grown energy, according to a new report. 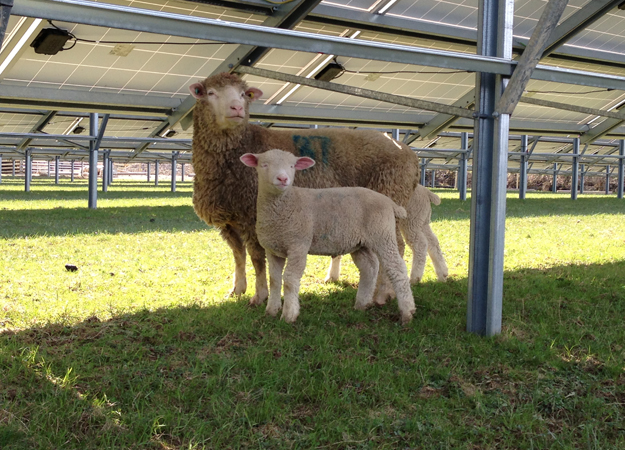 The BRE National Solar Centre, in partnership with the National Farmers Union (NFU) and the Solar Trade Association (STA), has today (12 September) produced new guidance which explains how conventional agriculture and ground-mounted solar electricity generation can be coupled for the mutual benefit of both.

It explains that solar farms are often used for the grazing of sheep and can be particularly suited to the fattening of young, hill-bred lambs.

“Only a negligible land take is required to make a major contribution to Britain’s clean energy needs, so the future looks bright for solar grazed lamb and free-range solar chicken.”

Newlands Farm now produces enough annual green electricity to power 1,285 average homes which, in local terms, is about half of the homes in Axminster. This electrical output saves around 2,192 tonnes of carbon each year compared to traditional energy generation methods. “It’s environmentally friendly and it suits the farmers’ industry very much because it gives them a regular income,” said Churchill.

The report joins a suite of guidance on best practice for solar developments published by the National Solar Centre. Earlier this year, the organisation worked with the Solar Trade Association and leading conservation NGOs to publish the ‘Biodiversity Guidance for Solar Developments’ on how to use solar farms as wildlife havens.

The STA’s head of external affairs Leonie Greene concluded: “This latest planning guidance complements the Solar Trade Association’s efforts to ensure that the solar industry works in partnership, not in competition, with farming. This explains how to do free-range, home-grown solar at its best – a secure solution to Britain’s energy crisis that generates clean energy side-by-side with food production. That roast lamb Sunday lunch has just got a lot sunnier.”